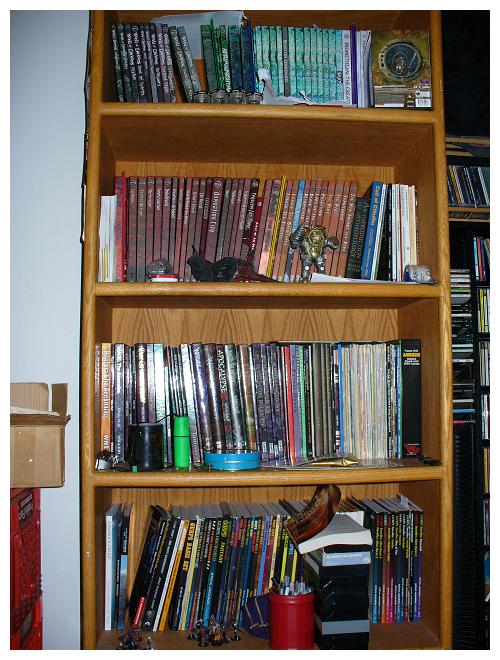 ...represents one of five bookcases I own, three of which hold exclusively gaming books.

I have been feeling a general unease with owning so many books for over a year now, I constantly think of selling them, or at the very least getting rid of most of the sourcebooks, but then I also fear that as soon as I sell something I'll be asked to play in a game or run something that involves whatever it is I just sold. I sold off my complete collection of Spelljammer and Dragonlance books years ago and I almost instantly regretted it, despite the fact that I've never run (or played in) a game involving either ever since.

Sometimes I just look at my books and I think "I am never going to use all of these."
Does anybody else feel these anxieties about their collection of books?

I have a long standing tradition by now that whenever I'm starting up a new game I tend to do some public brainstorming online somewhere, both to organize my own thoughts and to see if other people have cool ideas or might say something to spark an interesting character or schenario or whatever. I've done it here a few times, and figured I'd pester you all again.

I'm starting a steampunk/fantasy game, starting in a rough neighborhood of the world's largest metropolis. I want the game to explore ancient mysteries, have a good deal of action, and have a memorable villain. This is the 3rd game set in the same setting. This one is 50 years after the last campaign, all new PCs. The world has steam powered mad science, elemental magic, a new race of Changeling types that aren't well accepted, and ancient horrors from space. I'm still fleshing out the main conflicts and antagonists and even the title.

I think that's about it for now. I'm sure I'll post more details in the comments. Being a continuation of an existing setting, I'm really not looking to change too much about cosmology or geography. But if anyone has ideas for cool NPCs or story elements or antagonists or settings or a name, that would be awesome.

What's the general level out there of dealing with NPCs?

In some groups, the NPCs seem to be allowed to be ignored or bullied by the PCs with relative impunity, as a few recent episodes (212 and 213) of

darthsanddroidshave made fun of, as if they were cardboard cutouts.

In other groups, I've seen that NPCs are as fully realized, as "real", as the PCs, sometimes with elaborate & well-crafted side & back stories, as in a friend's campaign (here), and their actions are deliberately intertwined with the activities of the PCs over time. But that's a lot to ask of a GM.

In our campaign, the world is known to be very complex politically, and for a long time the PCs have been very low-level, and the NPCs were mostly high officials and powerful mages who seemed to know what was going on so much better than the PCs, where the dealings with them tended to stay at "do this job for me!" without much explanation and without other connection, but a lot of implied "don't touch, you'll break it." And now that we're higher up, the GM is frustrated that we still tend to look to NPCs for advice and direction.

Is there a better ground?
Collapse