Thinking proceeds apace. But sometimes thinking proceeds even faster when you get your thoughts down. So here I present the first two sections of the paper in brief form.

This is a paper on roleplaying games in general. It does not cover theater games, computer games, or even improv, even though those exercises do contain elements of RPGs. Nor is it a paper on any specific game. The RPG Project is a paper on RPGs as a whole, and is intended to provide advice on designing, publishing, running, and playing such. It will contain observations and conclusions some of you will disagree with, while others will wonder why it took your author so long to get it.

What you will read here are my obsersvations, my conclusions, my opnions. They won't always agree with yours, and they don't have to. They are informed observations, and they did involve hours of watching people in action, and even more hours in thought. All I will ask of you as that you give what you read some thought.

2. What is a Roleplaying Game?

A roleplaying game (RPG) is a pastime in which the participants take on the role of people living in an imaginary world which includes guidelines that describe that world and the characters' place in it. What is possible is set out in those guidelines. What roles the players have in the world are also described in the guidelines, and in the description of the world itself and their place in it.

(There I'm ending this, because more thought is called for, and the tune now playing on iTunes seem especially appropriate for this post.. :)

Like i've said before, I'm the new DM in my 4e D&D Group. I tried out a few combinations of combat scenarios for my party to fight against to help them (and me) transition into the new combat rules and abilities.

Right now i'm having a hard time balancing my forces. I'm either thinking what i have is too powerful for there fragile little level 2 frames can handle, and/or can easily handle. The problem i'm having is balance!

Sure I can do the whole 'immunity of fire' thing for certain creatures when dealing with the Dragonkin, but I feel they are expecting it to happen, and though effective it may be -is not very original. The other problem is the "Bamph" Warlock, or "Bamphlock". The Fey worshipping Warlock class that i mentioned before. The thing is, 1 Paladin and a Warlord generate auras (the warlord is visual range, the paladin is full group or aoe buffs). When the 'bamphlock' ports he gets all those bonuses because he stays in range of both (+ his armour bonus from his god given feat, which at the moment allows him to tank better then the paladins). He's hard to shut down, if at all, because its not a spoken skill (so i can't silence him) its an At Will power!

Anyway, i'm leading my group into a climatic fight and i'm at an empass. I can throw a few bricks, or i can throw the whole house at them... I'm leaning towards the House just to see if they can handle it -but i fear because of the situation they will be in to fight if they screw up they might not live to see another day!

Basically its going to be a power Demon class opening a Rift Gate, + a few spell casters and undead melee classers.

Course i've also planned for the odd ball 'they kill everything and decide to throw someone through the portal to see whats on the other side'. Which unfortunately would equally be bad -seeing how the 9th level of hell is brimstone and fire and instant killy soul sucking death... but it will be a laugh :P

Normally you guys are a pretty awesome bunch, which is why I'm so torqued off over the posting from the last week.

Let me make this clear - flaming isn't acceptable.  If someone's posting something that's out of line, the appropriate thing to do is to send me a private message and I'll have a look at it (if you include links that's even better).

mythusmagedrama is over starting right now.  There's lots of you whose behavior has been pretty annoying over the past week.  I won't name names, you know who you are.  Consider this a blanket warning - if this crap keeps up I'm just going to start banning folks.

So, the trailer for the new movie Hancock got me thinking about Superhero games. I'd like to eventually run a sort of Superhero/mutant game where extraordinary people are VERY rare--my players would probably be the only supers that they know of. I'm curious what systems everyone likes for superhero games. I've got access to Aberrant, Brave New World, and Mutant & Masterminds which would all fit my requirements, but I wonder if there is anything else out there worth looking into.

Also, for anyone who has seen the TV series Avatar: The Last Airbender, I am actively planning to run a game sometime after the 3rd season ends next month. But again, I would like opinions on system. Big Eyes Small Mouth 3rd edition, Star Wars Saga's edition, and D&D 4th edition would all work if I adapted the rules and powers to fit the Avatar World. I've also debated using the Exalted system. I've seen one small project out for an Avatar RPG, but I remember not liking how they had things set up. If you were to run or play an Avatar Game, what system would you use/like to use?

I'm sure I could just use a standard D20 system for both, but whats the fun of that? ^_^

Today we said farewell to a friend. The RPGA Living Greyhawk campaign officially sunsetted about an hour and a half ago, at the end of the last slot of Origins 2008. I've had the privilege of being both a player and a GM in the campaign for the past 3 years, since I started playing D&D in 2005. And this weekend, I had the honor of running the very last Core adventure six times. The adventure, COR8-12 Foundations, was written by someone I consider a friend, Eric Menge. I won't spoil it, because LG adventures are available for order and play through Dec 31, but I will say that it is a very well written adventure that not only ties up some of the major plot strings in the Core arc, it also pays homage to the past 8 years of LG, as well as Gary Gygax the past 30+ years of D&D. I have to give major kudos to Eric for this adventure - it is a complete win. Every time I read the conclusion to players, I get choked up and teary eyed.

I also worked as a Marshall for the adventure - I got to try to match up players and seat them with a judge, in a timely fashion. I had a bunch of awesome judges this weekend - Patrick, Melody, Brian, Bob, Doug, and Annie, as well as Eric, the author. I think I forgot a name or two, for which, I profusely apologize. Everyone was always on time, ready to judge, and I have -never- had such a positive response from my tables. Major, major thanks to them for keeping the faith and never wavering, even in the face of failing voices and late nights.

I want to thank our HQ staff and all of the other RPGA staff that make it possible for us to attend these conventions and run players through these adventures. You all rock - Dave, Willi, Mary, Yvette, Theresa, Jay, Konrad, Mike, Tamela, and everyone else. Thank you for enabling us to bring our own little kind of crazy to the convention and share it with our players.

In my experience, at the end of every convention, while on the plane or drive home there's a downshift in emotion. When the con starts, everyone begins to bounce off each other and emotions just ramp up into high gear. The crazy comes out, and people start having fun, laughing, and smiling at anything and everything. All weekend you're putting in 110% to give people a good time, despite the fact that you came back from alcohol therapy at 3am and had to get up at 6:30 to get ready for the next slot. But then the last slot concludes, you've read the conclusion text for the final time, signed your last AR, and packed up your bags and started the trip home. The momentum disappears, and you start drifting back down to earth. That hit me really hard this year, because it's also the end of the campaign. I think this picture I took on my way out of the convention hall is somewhat representative: 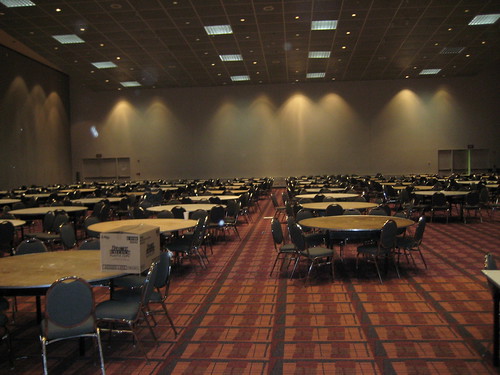 Since I won't be going to GenCon this August, I look forward to seeing everyone again in 2009 at DDXP, with a new campaign, a new system, and hopefully just as much fun.
'Allo. I have no idea if this is of interest to folks, but I decided to make a character for every game I own (inspired by a thread on RPG.net) just to try out the chargen engines and see how much fun it was. I'm doing it over on my own journal, just because I don't want to spam this comm, but what I might do is just make a little post here with a link to my character o' the day.

To wit: Mage: The Awakening was today's.

So, the winners of the Origins Awards have been posted. Some fairly cool stuff picked up awards this year.

I have not played Aces & Eights from Kenzer and Co. I hear it is a great book, so it is not surprising it won "Roleplaying Game of the Year" for this award set.

I thought Hobby Games: The 100 Best was a great book with some very interesting essays by a mix of game designers, so it landing "Non-Fiction Publication of the Year" is no surprise.